SCOTTSDALE, AZ – (Oct.21, 2020) – Bee, a beloved honeycomb whiptail stingray, who has called OdySea Aquarium home since the attraction first opened in 2016, spent weeks on the mend after a rare and risky surgery saved her life in August. Despite a recent setback in her healing process, the popular 6 ft, 80 lbs. female ray has made a full recovery after animal care experts at OdySea Aquarium were able to meticulously diagnose and surgically repair a perforation in her small intestine. 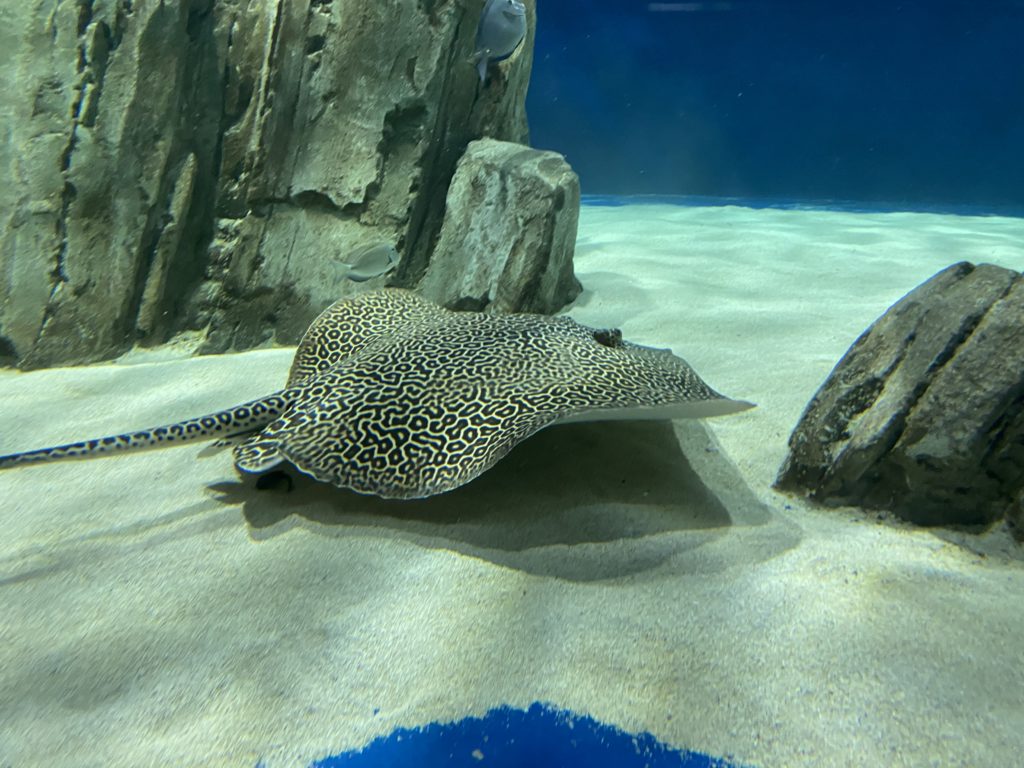 “Any time you perform a surgery on an aquatic animal, the risks and complications increase simply by having to take the animal out of water,” said Director of Animal Care and Conservation, Dave Peranteau. “But this surgery had never been done on her species, and we were going into it not knowing the exact location of the hole in her GI tract.”

Bee, a massive, highly recognizable and very social sting ray at OdySea Aquarium, with a striking coloration in a honeycomb-like pattern of large, black and yellow rings and reticulations was not doing well. A traditionally healthy eater, Bee was refusing her food for several days, even her favorite, shrimp. Concerned animal care staff called in Director of Animal Health, Dr. Eric Anderson to evaluate Bee. Weak and underweight, the much-loved ray was transferred to OdySea Aquarium’s off-site facility for further assessment.

Ultrasounds ultimately proved inconclusive, but blood work indicated she might be suffering from a possible infection. A gastroscopy and a colonoscopy both came back normal, so ulcers and foreign bodies in her stomach were ruled out.

“After a battery of tests revealed no definitive diagnosis, it was more than a little frustrating,” said Anderson. “But we kept moving ahead, eliminating what we could, until we found answers for this much-loved stingray.”

Clearly malnourished from refusing to eat, Bee was in dire need of nutrients. The team created a seafood gruel or “fish shake” made from blending shrimp, herring, vitamins, and minerals — components of her regular diet. This was administered through a long gastric tube gently placed through her mouth and directly into her stomach.

It was during the feeding procedure that a breakthrough in her diagnosis occurred. After dispensing her gruel, the team noticed a dark liquid coming from the back of her body. Looking closer, they realized this liquid, which contained undigested pieces of fish, was seeping from small openings or pores that communicate with her body cavity.

“We were shocked to see fish vertebrae in this liquid,” said Anderson. “Clearly fish vertebrae do not belong in her body cavity and she hadn’t had solid fish in about two weeks. This gave us a diagnosis. There was a hole somewhere in Bee’s GI tract in which food was leaking – and surgery was the only option to rectify it.”

Operating posed several high risks: the exact location of the perforation in her intestines was not known, Bee was unstable, and she would be under anesthesia while out of water. The veterinarian consulted with several colleagues at other aquariums around the country, noting a few had performed similar surgeries on other species.

Meanwhile, the animal care team was busy building a surgery table that catered to their beloved Bee. Rays, like fish, do not breathe air, but instead receive oxygen from water passing across the gills. With this in mind, the animal care team designed a sizeable custom table that had a soft, foam top to cushion Bee’s wide body, with room for Anderson to operate, and allowed water to drain off while animal care specialists continuously pumped it over her gills. They also cleverly incorporated a splash guard so when she “spit” or splashed the running
water from her respirations, it would not land in the surgery site.

There were mixed emotions heading into surgery. Given the team’s affinity with Bee, and the dangers of surgery, her fate was of the utmost concern to everyone involved.

“For me, there was a bit of excitement for the surgery. A new procedure, a new opportunity,” said Anderson. “But the weight of the procedure was still with me as it was a lifesaving effort. I knew many of the animal care team were bracing for the worst but hoping for the best.”

Bee was anesthetized intravenously through a large vein in her tail and was positioned on her back, when Anderson made his incision. To everyone’s relief, it was done in precisely the right place and the one-centimeter lesion was almost immediately visible.

“In this extremely tough situation, it was a really good feeling to find this perforation so quickly, and get straight to fixing it, reducing the time Bee was on the table,” said Anderson. “Looking at the defect or hole, there was no indication of what caused it.”

Post-surgery, Anderson again prescribed a diet of soft components, so the team continued to administer the seafood gruel, this time with no leakage. Over the next several days, fish filets and de-shelled shrimp were slowly reintroduced to Bee. In just over a week she began taking solid food again and became more active in her pool.

After a month of consistently positive movement, Bee unfortunately faced a setback in her progress, forcing her into emergency surgery once again.

“Just as we thought we were in the clear, we found that her incision site had partially dehisced or opened. Although the skin incision was compromised, the sutured intestine wall was still intact,” said Anderson. “This situation is unfortunate, but not completely unexpected in an animal that lives in the water. We closed the site again and Bee came through this second surgery just fine.”

In four short years, Bee has endeared herself to both staff and visitors at OdySea Aquarium. Arriving at OdySea Aquarium the mere size of a dinner plate, Bee “grew-up” in the aquarium’s innovative SeaTREK helmet dive attraction where she frolicked with her animal care team as well as countless visitors. After three and half years of captivating everyone at SeaTREK, the now massive ray was spending her days delighting visitors in the Voyager exhibit. Staff across the aquarium have worked closely with her, building a bond with the charismatic ray.

“Bee is super sweet and really seems to enjoy human interaction, which made her the ideal animal for our SeaTREK experience with guests,” said SeaTREK Manager, Shannon Aldridge. “Everyone who has worked with Bee can recall numerous heart-warming stories about spending time with her, how easy she was to train or her playful, affectionate side. She has made an impression over the years and no one wants anything to happen to Bee.”

After spending several additional weeks at the offsite facility recovering from her second surgery, Bee returned to OdySea Aquarium’s Voyager exhibit late last week where she is acclimating well to her old surroundings, and rejoined her buddy Bumble, a male honeycomb whiptail stingray along with other sea life in her exhibit. Veterinary and animal care staff continue to closely monitor her as guests are enjoying her triumphant return.

“We were relieved to hear she made it through both surgeries and are thankful she is doing so well,” said Animal Care Specialist Jessica Tammen. “We all feel a lot better she is now back home on exhibit.”

Unlimited Entry for 1 Year. Skip the line at the Ticket Window.

Discounts on Animal Encounters & Tours and at the Cafe and Gift Shop. Plus invitations to special events throughout the year.