WELCOME TO OUR VIRTUAL CLASSROOM

Sharks! Penguins! Jellies! Oh my! Dive in to all the facts, fun & activities right from home! 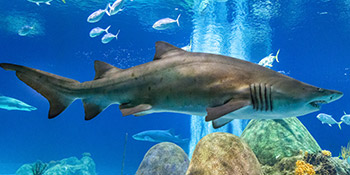 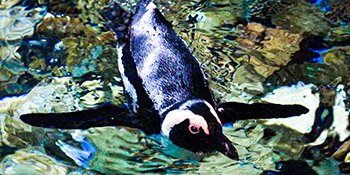 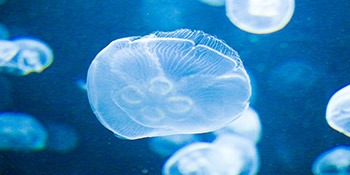 California sea lions can be found all up and down the Pacific coast, as far North as British Columbia and as far south as Mexico. The average lifespan of a California sea lion is approximately 15-25 years. Lifespan can exceed 30 years under human care because of the opportunity for consistent food supply and veterinary care, as well as the absence of predators, pollution, and habitat destruction. Adult California sea lion females weigh between 110-220 lbs on average; males weigh between 440-880 lbs when full grown. Sea lions typically cruise at speeds of around 12 miles per hour but can reach bursting speeds around 20mph.

Females typically have the appearance of a flat head, whereas adult male sea lions have a raised forehead on the center of their skull, caused by a ridge of bone, called a sagittal crest. This can be about 1-2 inches high when fully developed. Sagittal crests tend to be present on the skulls of adult animals that rely on powerful biting and clenching of the teeth, such as carnivores. Male California sea lions can also ‘flex’ the muscles on top of this crest, causing the crest to rise, when posturing aggressively or defensively toward other male sea lions.

Sea lions can hold their breath for up to 20 minutes and can dive to depths of around 900ft, although they typically don’t because their food source is in much more shallow waters. Sea lions are voluntary breathers, which means they consciously have to think about every breath they take. Their nostrils are naturally closed, but sea lions have specific muscles in their cheeks called myastacial muscles that flex to open their nostrils when they want to take a breath.

On the front of their face, or muzzle, they have whisker like appendages called vibrissae. They have 20-30 per side, or 40-60 total. They are made up of keratin, like our fingernails, but are highly sensitive to motion because they have nerve endings and muscle tissue in them. In dark, murky waters they use their vibrissae to detect schools of fish and changes in currents. 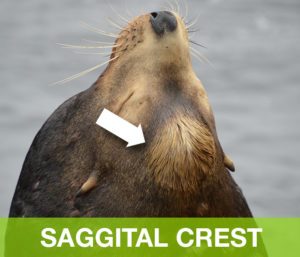 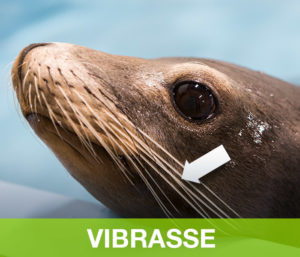 Pacific harbor seals are found north of the equator in both the Atlantic and Pacific Oceans. In the northeast Pacific, they range from Alaska to Baja California, Mexico. They favor near-shore coastal waters and are often seen on rocky islands, sandy beaches, mudflats, bays, and estuaries. They are the most widely distributed species of pinniped (walruses, eared seals, and true seals). They are true or crawling seals, having no external ear flaps. True seals have small flippers and must move on land by flopping along on their bellies. An adult can attain a length of 6 ft. and a weigh 290 lb. Blubber under the seal's skin helps to maintain body temperature. Females outlive males (30–35 years versus 20–25 years).

Pacific harbor seals spend about half their time on land and half in water. They can dive to 1,500 feet for up to 40 minutes, although their average dive lasts three to seven minutes and is typically shallow, and they sometimes sleep in the water. They are opportunistic feeders, eating sole, flounder, sculpin, hake, cod, herring, octopus, and squid. While harbor seals swim safely in the surf, they will often curiously watch humans walking on beaches. However, they are wary of people while on land and will rush into the water if approached too closely or disturbed. In fact, if disturbed too often, they have been known to abandon favorite haul-out sites or their pups. Both courtship and mating occur underwater. The mating system is not known but thought to be polygamous. Females give birth once per year, with a gestation period of approximately nine months. Birthing of pups occurs annually on shore. The timing of the pupping season varies with location, occurring in February for populations in lower latitudes, and as late as July in the subarctic zone. The mothers are the sole providers of care, with lactation lasting 4-6 weeks.

California sea lions have external ear flaps, similar to our external earlobes, but folded tightly to protect from water entering the ear canal.
Seals have only small holes that are the opening of an internal ear.

Sea lions use their foreflippers to propel them through water.
Seals use their hind flippers as their main power source.

Sea lion vocalizations sound like a bark or roar, which is how they got their name.
Seals demonstrate sounds such as wheezes, wretches, and blows.

Watch the video below to learn more about the Sea Lion and Seal differences.

WE ARE OPEN WITH LIMITED CAPACITY. GUESTS AGES 6+ ARE REQUIRED TO WEAR MASKS. MASKS ARE AVAILABLE FOR PURCHASE. CLICK HERE FOR WAYS WE ARE KEEPING GUESTS SAFE AND WHAT TO EXPECT WHEN YOU VISIT.