The Great Barrier Reef Tunnel can be enjoyed by adults and children alike.

About The Great Barrier Reef Exhibit

The Great Barrier Reef exhibit is one of the most colorful and diverse exhibits at OdySea Aquarium. Over fifty-five species of marine reef fish call this exhibit home. With a volume of 55,000 gallons, it is one of the aquariums largest exhibits. It is also only one of two exhibits to have a large acrylic tunnel running through it, offering ample viewing areas.

The animals living within this exhibit must be keep at temperatures in the mid to upper 70s in order to thrive. If you look closely, you may be able to see a large variety of colorful chromis, anthias, and damsel fishes hidden in the coral and rockwork.

Large fish in this exhibit are equally impressive. It’s not hard to spot species like the Humphead unicorn fish, which are Australian coast natives and can live well into their twenties. The largest fish in this exhibit is the Maori wrasse, which can grow to be over 400 pounds, making it one of the largest reef fish species. As this animal matures it will transition from an emerald green color to an aqua blue coloration. The hump on its head will also enlarge signaling the transition.

Due to the diversity of animals exhibited within this exhibit, a large and varied diet must be fed out daily. Multiple types of fish, invertebrates, marine plants and other seafood items are feed to these animals multiple times per day.

Did you know the Great Barrier Reef is the world’s largest coral reef ecosystem? Thousands of fish and invertebrate species call this marine ecosystem home. The park within which the reef resides is roughly half the size of Texas! 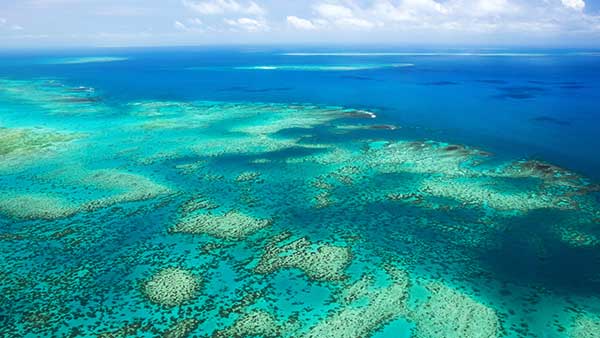