Seahorses use their tails to anchor themselves to rocks and seagrass

Learn about the diet, lifespan, and behavior of seahorses.

About The Seahorse Exhibit

At 200 gallons, the seahorse exhibit is relatively small compared to many of the other exhibits found in the aquarium. This is the only exhibit in the aquarium in which seahorses reside. At first glance the exhibit may appear to be empty but if you look carefully you will soon see many seahorses hiding amongst the sea grass and rocks. Seahorses are reclusive by nature and rely heavily upon camouflage for survival. They swim slowly by undulating their dorsal fin and use their tails to hold on to rocks, sea grass, and even each other to anchor themselves in one spot. The seahorses in this exhibit consume a diet made primarily of small marine invertebrates. The male seahorses have a pouch in which the female will deposit her eggs. After some time, the eggs will hatch and small baby seahorses, called fry, will be released. Depending upon the species, hundreds to thousands of fry may be released. Some studies estimate that only 1% of the fry will reach maturity.

Did you know that seahorses are part of a family of animals called Syngnathids? Syngnathids include seahorses, sea dragons, pipefish and pipe horses. These animals can be found in tropical and temperate waters around the world.

Did you know that due to their reclusive nature and their natural ability to camouflage with their surrounds, it can be challenging to find these animals even in their natural habitats? 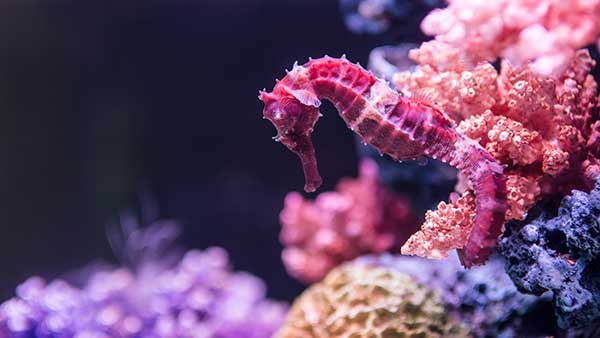