The final stop while on the OdySea Voyager is Shark Waters.

This exhibit is home to some of our largest inhabitants, including lemon sharks, nurse sharks, and sand tiger sharks.

Information about sharks will be supplied to you through a voiceover recording.

The final stop on your journey through the living sea is Shark waters, the largest exhibit at OdySea Aquarium. Shark waters holds just under 400,000 gallons of ocean water, and houses over twenty different sharks representing four different species. The largest sharks in this system are called lemon sharks. Our lemon sharks are over eight feet in length and weigh over 250 pounds! Lemon sharks get their name because some individuals have a yellowish coloration to them. The large silver sharks you see zooming around are called Sandbar sharks. They are one of the most common sharks found off the Atlantic coast of the United States. They max out at about 200lbs. The sharks that are moving slowly around the exhibit are the sand tigers. You can easily tell them apart from the others by their many rows of sharp teeth and the black pigmentation marks located along the sides of their bodies. The final shark species you will see is the nurse shark. They have a much rounder face and flatter body than the other sharks and they can normally be found resting on the bottom.

All of the sharks in this exhibit are fed a carefully calculated diet based off a number of different variables such as weight and age. Each shark has a specific symbol it associates with food and when the symbol is placed in the water the shark swims to the surface and the animal care specialist is able to feed it with tongs. The other fish you see in this exhibit are different types of jacks. Jacks are a predatory fish and the two species in this exhibit will mature at weights of 30-45lbs. Shark waters can be viewed from the carousel, from the curved window in front of the jelly exhibit and from the Aqua Lobby restrooms. In 2017, these restrooms received recognition as the best restrooms in America!

That the sharks in shark waters consume around 250lbs of seafood each week? The sharks are offered a variety of fish, squid and occasionally crab and only need to eat three times per week.

In order to make the salt water for this system, the animal care team had to add multiple truckloads of sea salt! 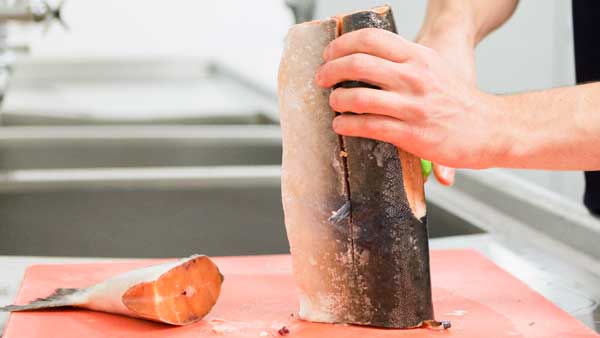