The second stop while on the OdySea Voyager is Sea Lion Sound.

This exhibit is home to our rescued sea turtles.

See how many sea turtles you can find.

Sea Turtle Reef is the second exhibit you will encounter while in the carousel. It holds over 100,000 gallons of water and houses some of our most beloved animals: our rescued green and loggerhead sea turtles. The small ones you see are green sea turtles, while the larger ones are loggerheads. Green sea turtles are herbivorous, and eat a variety of vegetables like romaine lettuce, bell peppers, zucchini, and squash. Loggerhead turtles are carnivorous, and consume things like fish, crabs, and squid.

All turtles in this exhibit came to OdySea Aquarium because they could no longer survive in the wild. Some have sustained permanent injuries from boat strikes or fishing lines, and have had to have limbs amputated or weights attached to their shells in order to survive. Those with weights attached to their shells have a condition commonly known as “Bubble Butt Syndrome”, which means that air became trapped under their carapace, preventing them from diving and swimming like normal turtles. The weights allow them to regulate their buoyancy and thrive.

Our sea turtles also share their exhibit with many Caribbean reef fish. The large school of silver square-shaped fish are appropriately called lookdowns, and always appear to be looking straight down. Look carefully enough and you may even be able to find a rooster hogfish. These animals get the first part of their name from their dorsal spines that resemble a rooster comb and the second part of their name from the behavior they exhibit as they search for food in the sand. When fully grown, these fish can reach lengths of up to three feet! Another animal to keep an eye out for are the parrotfish. Parrotfish are some of the most colorful animals in this exhibit and their teeth form a beak like structure that allows them to break off chunks of coral and extract the algae on and within the coral. They then deposit the undigested coral fragments as sand. 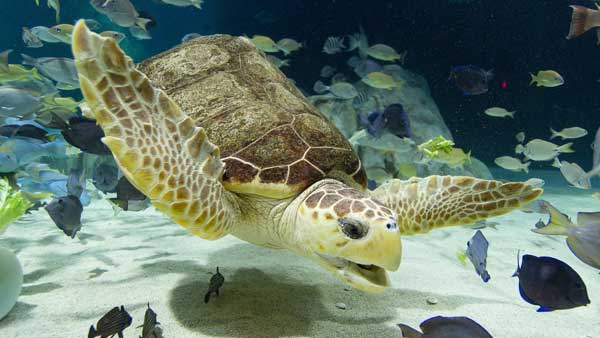